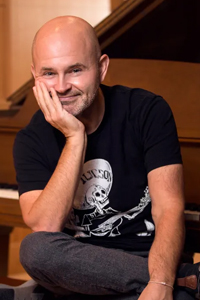 American tenor and voice teacher JASON FERRANTE has been praised by Opera News for "singing up a stylish storm" and by the Sarasota Herald Tribune as "one of the best voices I have heard"  He returns to the stage in the 2021-2022 season as Beadle Bamford in a new production of Sweeney Todd with Opera Omaha, Don Basilio and Don Curzio in Le Nozze di Figaro in his debut with Virginia Opera, the Fourth Jew in Salome in his debut with Tulsa Opera and a debut with the Palm Beach Symphony as tenor soloist in Mozart's Requiem conducted by Gerard Schwarz.

With two decades of experience on the operatic stage in over 80 different roles and on the concert stage as a tenor soloist , Ferrante maintains an acclaimed career as both a tenor and a sought-after voice teacher, having taught singers who appear on the greatest stages in the world as soloists, recording artists, and winners in major competitions. As an administrator,  he leads the classical voice discipline for YoungArts and is currently on the voice faculty of several American young artist training programs. In 2021, Ferrante served as the Director of the Wolf Trap Opera Studio and continues his role as voice faculty at Wolf Trap, and the training programs at Minnesota Opera, Pensacola Opera and Nashville Opera.

Ferrante's most recent performances include a debut with the New World Symphony as the tenor soloist in Nico Muhly's Keep in Touch conducted by the composer, Beppe in Pagliacci with Opera Omaha, Bardolfo in Falstaff  with Intermountain Opera, a debut with Nashville Opera as Little Bat in Susannah, a return to the Key Chorale as the tenor soloist in Elijah, his first performances as Remendado in Carmen with the Bar Harbor Music Festival and Little Victor in Kevin Puts and Mark Campbell's Elizabeth Cree, a role he created for Opera Philadelphia and reprised with Chicago Opera Theater.

On the international stage, Ferrante made his European debut at Teatro Comunale di Bologna as Beadle Bamford in Sweeney Todd. The
production also appeared at Teatro Pavarotti in Modena, Teatro Rossini in Lugo, and Teatro Municipale in Piacenza. He was the Tenor Ghost in Corigliano’s The Ghosts of Versailles with the Wexford Festival, and sang Pong in Turandot under the baton of Lorin Maazel in the grand opening of the Zaha Hadid-designed opera house in Guangzhou, China.

Other operatic career highlights include Don Basilio/Don Curzio in Le Nozze di Figaro in his Opera Philadelphia debut which was also filmed in HD and broadcast in Independence Square,  Goro in Madama Butterfly with Arizona Opera, Atlanta Opera, Kentucky Opera, Syracuse Opera, Opera Omaha, Madison Opera, Orlando Opera, Berkshire Opera, Opera Birmingham, and Annapolis Opera;  King Ouf in L'etoile  at New York City Opera, Tavannes in Les Huguenots and Basile in Le roi malgré lui at Bard Summerscape (both commercially recorded and available on iTunes), Jacquino in Fidelio with Opera Boston, Triquet in Eugene Onegin with North Carolina Opera, Borsa in Rigoletto with Florida Grand Opera and Opera New Jersey, Spoletta in Tosca with Florida Grand Opera, Don Basilio in Le Nozze di Figaro  with Arizona Opera (directed by Sir Thomas Allen) Atlanta Opera, Eugene Opera, Berkshire Opera, Dayton Opera and the Orlando Philharmonic; the Fourth Jew in Salome with the Boston and Chicago Symphony Orchestras and Palm Beach Opera, The Magician in The Consul  with Arizona Opera, Florida Grand Opera and Opera New Jersey;   Arturo in Lucia di Lamermoor and Monostatos in The Magic Flute with Arizona Opera, Peter Quint in The Turn Of The Screw with Sideshow Opera in Charlottesville, VA, Rooster in the musical Annie with Ashlawn Opera, Tybalt in Roméo et Juliette and Beadle Bamford in Sweeney Todd  with Wolf Trap Opera where he also created the role of Cornaccio in the world premiere of Musto’s Volpone,  Bardolfo in Falstaff and Torquemada in L'heure espagnole under the baton of Seiji Ozawa at Tanglewood,  Paolino in Il matrimonio segreto with Berkshire Opera, Eumete in Il ritorno di Ulisse in patria with the Greenwich Music Festival, Brighella in Ariadne auf Naxos and Dr. Cajus in Falstaff, both under the baton of Julius Rudel at the Aspen Music Festival and numerous roles while a student at Juilliard in Werther, The Love for Three Oranges, Le Nozze di Figaro, The Fairy Queen, The Magic Flute, Der Kuhhandel and Street Scene.

Ferrante has quickly become one of the leading voice teachers of professional singers. His students sing around the world with opera companies including The Met, Covent Garden, English National Opera, Santa Fe, San Francisco, Opera Theatre of St. Louis, Glimmerglass, and Wolf Trap.  They have been winners and have been featured in the Metropolitan National Council Auditions, the BBC Cardiff Singer of the World Competition, Operalia, the George London Foundation Awards and have been Presidential Scholars in the Arts. He currently serves as a vocal consultant/faculty member to the young artist programs at Wolf Trap Opera, Minnesota Opera, Michigan Opera Theatre, Nashville Opera, Kentucky Opera, Pensacola Opera and has served in that capacity for Arizona Opera and Virginia Opera.  He was on the faculty of the UBC Summer Vocal Workshop in Vancouver, BC and has given regular masterclasses at opera companies and schools around the United States. He is a national panelist and master teacher for YoungArts, the core program of the National Foundation for Advancement in the Arts, which recognizes and supports America's most talented high school artists in the visual, literary, and performing arts and includes nominating future Presidential Scholars in the Arts.

The Baltimore native holds Bachelor and Master of Music degrees from The Juilliard School where he held the Alice Tully Voice Scholarship and studied voice with the legendary vocal pedagogue Beverley Peck Johnson. His professional training includes two summers at Wolf Trap where he was a two-time recipient of a Shouse Grant, three summers at the Aspen Music Festival, and two summers at Tanglewood. His additional studies were with Rita Shane, Phyllis Curtin, Cynthia Hoffmann and Richard Leech.

Ferrante currently makes his home in the suburbs of Miami, Florida and maintains voice studios there and New York City. He is a member in good standing of NATS and AGMA.