For Guitarists 30 and up 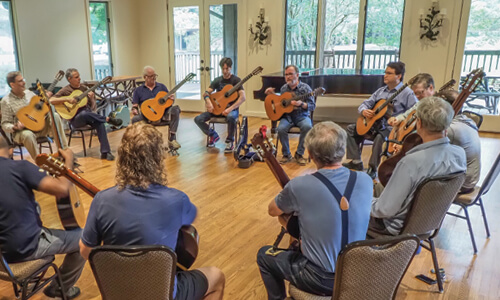 Program Dates: June 11 - 17, 2023
Ages: 30+
Tuition: $1800; includes all instruction, on-campus housing, and meals
Registration fee: $500, applies toward the cost of tuition
How to register: Submit your registration now at MyBMC!

Come to Brevard to be a classical guitarist for the week! Under the direction of Professor Adam Holzman, Brevard's Adult Guitar Workshop (AGW) is a comprehensive 5-day course of study offering lessons, masterclasses, and ensemble playing for classical guitarists age 30 and up. Instruction will be geared to the level and specificity of the participant.

Areas of focus and program features will include:

Attendees should arrive on Sunday, June 11, 2023 between 10:00am-4:00pm. There will be an evening meeting and meal, and the first class is Monday morning. Departure is by noon on Saturday, June 17.

The nearest airport to Brevard is the Asheville Regional Airport (AVL), or participants can drive to the Music Center.

The cost for the Adult Classical Guitar Workshop @ Brevard will be announced. This includes tuition, on-campus housing, meals, and all instructional activities. Each participant is responsible for travel to and from Brevard.

A non-refundable registration deposit of $500 will be charged at the time of your online registration. This amount is not an additional fee, as it holds your spot and applies toward the total cost of the workshop. All tuition is due by May 1.

All payments, except the $500 registration deposit, will be fully refunded if the Center receives notice of cancellation before May 1.

No reduction in fees can be made for late arrival or early departure. No refunds will be made after May 1.

Payment can be made online or you can mail a check to the address below. If you mail a check, please make the check out to "Brevard Music Center." Be sure to write "Guitar Workshop" and the full name of the participant in the memo field.

Please contact agw@brevardmusic.org if you have any questions- we hope you are able to join us in June!

Adam Holzman, international performing and recording artist, is hailed as "...polished and quite dazzling," by The New York Times, "...brilliant!," by De Gelderlander, Holland, and "...masterful!," by The Toronto Star. Five times he has been a winner in major international competitions.

Mr. Holzman has performed at the prestigious Concertgebouw in Amsterdam, distinguished New York venues such as Kaufman Hall at the 92nd St. Y, Merkin Hall, and Carnegie Recital Hall, as well as in music festivals and series from Miami to San Francisco, Boston to New Orleans. His extensive international performances have taken him throughout Europe, Canada, Mexico, Central and Latin America.

Mr. Holzman's commitment to new music has led him to co-commission Samuel Adler's first Concerto for Guitar and Orchestra. He has also premiered works by composers Robert Helps, Roland Dyens, and Stephen Funk Pearson among others.

Adam Holzman is founder of the Guitar Department at the University of Texas at Austin's Butler School of Music where, in addition to his active performing career, he heads a thriving guitar studio. His students have won an array of international prizes. From 1992-1994 Mr. Holzman held the title of "Maestro Extraordinario" given by the Universidad Autonoma de Nuevo Leon, Monterrey, Mexico, where he served as artist-in-residence. He was awarded the Ernst von Dohnanyi Prize for Outstanding Achievement from Florida State University and has been named The Parker C. Fielder Regents Fellow in Music at the University of Texas at Austin. Mr. Holzman has been featured on the covers of both Classical Guitar Magazine and Guitart Magazine.

Mr. Holzman's performance studies were with Bruce Holzman at Florida State University, Albert Valdes Blain, Eliot Fisk and Oscar Ghiglia. He was chosen twice to perform in the historic Master classes of the legendary Andres Segovia.

Adam Holzman performs on D'addario strings and resides in Austin, Texas with his wife Carolyn and their son Benjamin.

Since then, Ms. Masters has been active as a solo recitalist, chamber musician and concerto soloist around the world. Recent seasons included appearances at festivals and on concert series through the United States, Europe, Russia, China and Australia.

Masters received both the Bachelor and Master of Music degrees from the Peabody Conservatory, where she studied with Manuel Barrueco, and completed the Doctor of Musical Arts degree at the University of Southern California as a student of Scott Tennant.

Ms. Masters is currently on the guitar faculty of Loyola Marymount University and California State University Fullerton, and is President of the Guitar Foundation of America. She has released seven recordings (Naxos, GSP and independent releases), and has published three books with Mel Bay Publications and Alfred Music.