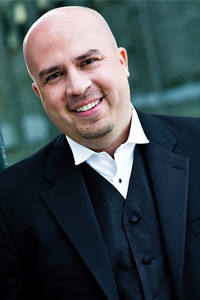 Conductor Joseph Mechavich’s passion and commitment to excellence in the art form has helped to forge lasting and career-defining relationships with numerous opera companies, composers and orchestras in the United States and abroad. Maestro Mechavich has presided over productions of Porgy and Bess for Deutsche Oper Berlin, Nixon in China for Auckland Philharmonia/New Zealand Opera, Il barbiere di Siviglia for The Washington National Opera, Madama Butterfly for New York City Opera, and Dead Man Walking for Atlanta Opera. The Miami Herald lauded Mechavich’s artistry in a recent production of Werther at Florida Grand Opera: “An astute conductor realizes that Massenet’s music must be as emotive and expressive as the action on stage. Joseph Mechavich brings out the French Romantic’s lilting emphasis on strings and woodwinds in the opening strains and throughout the first act, and pushes his orchestra to full throttle for the tumultuous, dark, and dissonant third and fourth acts. Onstage the tug of war between duty and desire continues to build, while in the orchestra pit, the music heightens the tension.” His 2019-2020 season includes Il barbiere di Siviglia for Minnesota Opera, Everest for Austin Opera, Macbeth for Florentine Opera, Die Zauberflöte for North Carolina Opera, Riders of the Purple Sage for Arizona Opera, and Carmen for Kentucky Opera.

In addition to his impressive command of the standard operatic repertoire, Maestro Mechavich is also known for his deep commitment to American opera. Of his Nixon in China at San Diego Opera, Broadway World extolled “The expertise in 21st century operatic repertoire that conductor Joseph Mechavich demonstrated in 2012’s Moby-Dick has surely increased exponentially as portrayed in his rendering of John Adam’s complex score. Mechavich showed great command and sensitivity throughout, both controlling and supporting the orchestra in their task of performing parts that were most difficult and intricate." Mo. Mechavich is a champion of the music of Carlisle Floyd and Jake Heggie. He has conducted productions of Floyd's Susannah, Of Mice and Men, and Cold Sassy Tree and recorded Wuthering Heights. Mo. Mechavich has conducted highly acclaimed productions by Jake Heggie such as Moby-Dick, Great Scott, Out of Darkness: Two Remain, and Dead Man Walking.