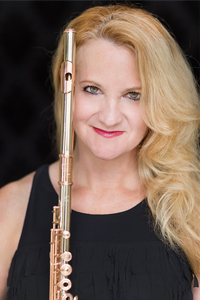 American flutist Amy Porter enjoys a versatile and distinguished career as one of the world’s leading concert performers. Critics uniquely note her “strength, beauty, a captivating and seductive force, sensitivity, perfection and a sense of humor.” Ms. Porter combines her exceptional musical talent with her passion for scholarship and her musical achievements have resulted in many awards and accolades for her concerts and discography. Regarding German composer Sigfrid Karg-Elert, a reviewer from Spain notes, “from the other world he has been inspired and taking pride in the soul of his true muse, Amy Porter.”

Ms. Porter is a Haynes Artist who performs recitals in the major concert halls of Asia and the United States with pianist Christopher Harding. She has performed as concerto soloist with orchestras throughout the world. Ms. Porter has been heard in recital on National Public Radio, highlighted on PBS Live From Lincoln Center. She has been featured on the covers and written articles for Flute Talk Magazine in the USA and The Flute Magazine in Japan. An avid arranger and editor of educational study guides, Carl Fischer Publishers produced Ms. Porter’s arrangement of the Six Cello Suites by J.S. Bach for Flute. Simultaneously she released a two-CD set of selections from the Cello Suites, recorded in Ann Arbor’s historic Hill Auditorium. Her latest Study Guide is “THE GAUBERT CYCLE: The Complete Works for Flute and Piano by Philippe Gaubert” with guests Tim Carey and Penelope Fischer. Her latest CD is with Trio Virado (violist Juan-Miguel Hernandez and guitarist Joao Luiz) is Mangabeira featuring works and premieres by Piazolla, Hand, Brouwer, Assad and Luiz.

A native of Wilmington, Delaware, Ms. Porter is a graduate of the Juilliard School in New York. Her teachers at Juilliard were Samuel Baron and Jeanne Baxtresser, and in Austria her teachers were Alain Marion and Peter-Lukas Graf. After Juilliard, she held the position of Associate Principal Flute in the Atlanta Symphony Orchestra for eight years before becoming Professor of Flute at the University of Michigan School of Music, Theatre & Dance in Ann Arbor. She is the founder and Past President of the non-profit Southeast Michigan Flute Association. She is founder of the popular workshop, “Amy Porter’s Anatomy of Sound” held annually in Ann Arbor with Professor of Theatre (Movement) Jerald Schwiebert and internationally renowned guests. She also is the master teacher for the MPULSE Summer Institute for advanced High School students at U of M.