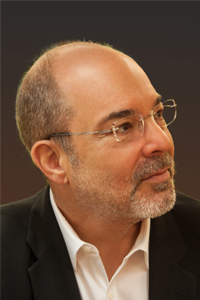 Norman Krieger is professor of piano at the Indiana University Jacobs School of Music.

A native of Los Angeles, he is one of the most acclaimed pianists of his generation and is highly regarded as an artist of depth, sensitivity, and virtuosic flair. He previously served as professor of keyboard studies at the University of Southern California's Thornton School of Music since 1997.

In 1987, Krieger made headlines by being named the Gold Medal Winner of the first Palm Beach Invitational Piano Competition. Earlier, in 1984, he earned selection to the distinguished roster of Affiliate Artists, where he participated in the Xerox Pianists Program from 1984 to 1986. He is also the recipient of the Paderewski Foundation Award, Bruce Hungerford Memorial Prize, Victor Herbert Memorial Prize, Buffalo Philharmonic Young Artists Competition Prize, and Saint Louis Symphony Prize.

Krieger's first piano teacher was his uncle, Rudy Hadda. Later training began in Los Angeles under the tutelage of Esther Lipton. At age 15, he became a full-scholarship student of Adele Marcus at The Juilliard School, at which he earned both Bachelor's and Master's degrees. Subsequently, he studied with Alfred Brendel and Maria Curcio in London and earned an Artist Diploma from the New England Conservatory, where he worked with Russell Sherman.

Krieger's solo recordings include five albums available on the Artisie 4 label: Norman Krieger: Transformations, comprised of Liszt's two piano concertos and his Totentanz, with the Prague Radio Orchestra; Gershwin in Prague, including "Rhapsody in Blue" and Concerto in F, with the Prague National Symphony Orchestra, and Tomas Svoboda: Piano Concertos with the Dayton Philharmonic Orchestra, both under the baton of Neal Gittleman; Norman Krieger: Piano Recital, with music by Bach, Mozart, Beethoven, and Chopin; and American Piano Concertos, featuring works by MacDowell and David Wiley with the Roanoke Symphony Orchestra conducted by Wiley.

In 2013, he performed Gershwin's Piano Concerto with the New West Symphony, Beethoven's Concertos Nos. 4 and 5 with the Dayton Philharmonic and Ravel's Concerto for the Left Hand with the Brevard Music Center Orchestra. He regularly gives master classes around the world.

Krieger is the founding artistic director of The Prince Albert Music Festival in Hawaii. Since 2008, he has served on the summer faculty at the Brevard music festival in North Carolina.