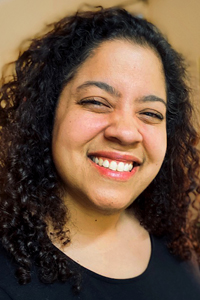 An active performer, Mrs. Kozoroz was Assistant Principal violist with the Virginia Symphony, performed with the Milwaukee Symphony, and was violist and founding member of the Ambrosia String Trio which performed in the U.S. and abroad. Mrs. Kozoroz was also violist with the Harrington String Quartet which recently released their recording of the complete Mendelssohn string quintets with guest violist, James Dunham.

Mrs. Kozoroz is a seven time scholarship winner of the American Symphony Orchestra League and grant recipient from the International Congress of Symphony and Orchestra Musicians. She was also an ASTA scholarship recipient and has been honored as an Outstanding Young Woman of America. Mrs. Kozoroz continues to be a strong advocate and advisor for the Sphinx Organization (Music Scholarship Assistance Fund) which aids in the mentoring and financial support of minority student musicians in America.

An enthusiastic educator, Mrs. Kozoroz has been on the viola faculty at Old Dominion University, Denison University, Christopher Newport University, West Texas A&M, The Sewanee Music Festival and The New England Music Camp as an instructor, chamber music coach, advisor, and lecturer. She has been guest clinician at the Lawrence Conservatory of Music, the Ohio State University and the University of Montana. Mrs. Kozoroz has also taught at the Harlem School for the Arts where she was a member of the active West Side String Quartet which performed as a mentoring ensemble for inner city children. She also was the Director of the Milwaukee Youth Symphony Orchestra award winning Progressions program which is an intense string training program for underrepresented children in Milwaukee Public Schools.

Presently Mrs. Kozoroz resides with her family in Brevard, NC, serves on the faculty of Brevard College, performs with the Asheville Symphony, and is the Program Director at the Brevard Music Center. In her spare time, she enjoys hiking with her husband, Michael and daughter Isabella, writing and singing, and has even been seen on a few music videos as well!

Mrs. Kozoroz can be heard on the Albany, Centaur and Summit record labels.