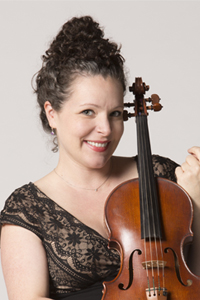 Maggie Snyder is Associate Professor of Viola at the Hugh Hodgson School of Music at the University of Georgia. She has performed solo recitals, chamber music, concertos, and as an orchestral musician throughout the United States and abroad. She has appeared at the Kennedy Center, Carnegie Hall, the Kaufmann Center, the Seoul Arts Center, and in Mexico, Greece, Korea, and Russia. She has performed under the batons of James Levine, Yuri Temirkanov, David Zinman, Robert Spano, Leonard Slatkin, James dePriest, Julius Rudel, James Conlon, Keith Lockhart, and Michael Tilson Thomas, and at such festivals as the Brevard Music Festival, the Sewanee Summer Music Festival, and the Aspen Music Festival where she was a Time Warner Fellow. In May, 2009, she made her debut recital in Weill Recital Hall at Carnegie Hall as part of her sister duo, Allemagnetti, as an award winner with Artists International Inc. That recital featured three world premiere works which she commissioned by Thomas Pasatieri, Kamran Ince, and Garrett Byrnes, and the group was noted as a "winning pair," with a "highly promising debut," by the New York Concert Review. In 2001, Ms. Snyder was a semi-finalist at the 8th Primrose International Viola Competition. She is the principal violist of the Chamber Orchestra of New York, which is featured on the Naxos recording label, and is on the artist faculty of the Brevard Music Festival. She has performed chamber music with members of the Cleveland and Tokyo Quartets, and the Aspen String Trio. Her solo recordings, "Modern American Viola Music" and "Allemagnetti – Music for Viola and Harpsichord" are represented exclusively through Arabesque Recordings and available through iTunes.