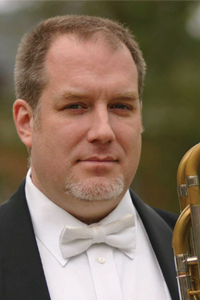 A native of Asheville, North Carolina, BMC alumnus Dan Satterwhite enjoys a versatile career. As an orchestral bass trombonist, he has held positions with the Orquesta Sinfonica de Asturias in Spain and the Orquesta Filarmonica de Santiago in Chile. Mr. Satterwhite was tubist of the internationally renowned Dallas Brass for six years, during which he performed hundreds of concerts and master classes throughout the United States, and appeared as a featured soloist with many orchestras, including the Cincinnati Pops, Florida Philharmonic, and the New York Pops in Carnegie Hall. His freelance musical experience includes performances and recordings on bass trombone, euphonium, cimbasso and tuba with such organizations as the Chicago Symphony, The Cleveland Orchestra, Metropolitan Opera, American Ballet Theater, the Dallas Cowboys Band, the Radio City Music Hall Orchestra, and the orchestras of over a dozen Broadway productions in New York, including Les Misérables, Phantom of the Opera, Miss Saigon, and The Lion King. Since making South Florida his home, Mr. Satterwhite has been a frequent guest musician with many orchestras, including the Alabama Symphony, Florida Orchestra, Naples Philharmonic, Florida Philharmonic, Jacksonville Symphony, and the Palm Beach Opera Orchestra. As a recording musician, he can be heard with artists from Renee Fleming to Rihanna. He is currently Professor of Trombone at Lynn University Conservatory of Music and serves as bass trombonist of the Miami Symphony, Boca Symphonia, and the Atlantic Classical Orchestra. Dan Satterwhite is a Yamaha Performing Artist.