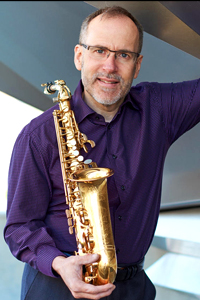 Acclaimed internationally for his innovative style and musical virtuosity, Yamaha and Vandoren Performing Artist Joseph Lulloff has been described by Branford Marsalis as "a marvelous musician" whose "knowledge of music, along with his ability to embrace music normally considered outside the sphere, makes him a joy to listen to." Mr. Lulloff enjoys a prolific career as both a performing saxophone artist and teacher. A recipient of the Concert Artists Guild Award, the Pro Musicis International Soloist Award, the Michigan State University Distinguished Faculty Award, and the Dortha J. and John D. Withrow Award for Excellence in Teaching from the MSU College of Music, Mr. Lulloff has been featured as guest soloist with the Cleveland, Minnesota, Grand Rapids, and Brevard Music Center Orchestras amongst others. He has concertized extensively throughout North and South America, Europe, and Asia, performing at music festivals and notable venues such as the Ojai Festival, the Lucerne Festival, the Moscow Autumn Festival, the Brevard Music Center Festival, Carnegie Hall, Disney Hall, Weill Recital Hall, Jordan Hall, and the Smithsonian Institute. Mr. Lulloff has also served as principal saxophonist with the Chicago, Cleveland, Detroit, Minnesota, and St. Louis Symphony Orchestras.

Energy, intensity, and artistry characterize all of Mr. Lulloff's performances in both classical and jazz settings. Commenting on his concerto performance with the Cleveland Orchestra of the Ingolf Dahl Concerto for Alto Saxophone, music critic Dan Rosenberg wrote, "Lulloff was amazing. He traversed the instrument with seamless agility, filled out phrases for all their expressive worth and achieved dynamics from inaudible purrs to penetrating howls." The Akron Beacon Journal wrote "Joseph Lulloff played with all the finesse of a top-notch concert violinist." Further, the New York Times commented on this performance, stating that "...Mr. Lulloff demonstrated considerable virtuosity as a soloist."

Mr. Lulloff holds a strong interest in collaborations with many notable composers to enhance the contemporary saxophone canon. The Bryant Concerto was commissioned as a gift to him and the MSU Wind Symphony, and has received rave reviews from his performances both in the United States and abroad.

He currently serves as Professor of Saxophone at Michigan State University where his students have won multiple prestigious national competitions.