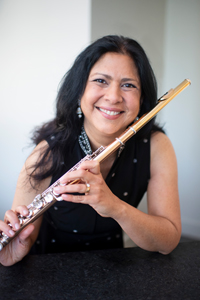 Originally from Mumbai, India, flutist Dilshad Posnock has appeared in concerts and festivals across the United States, England, Puerto Rico and India, and has been featured on BBC TV and BBC World Service Radio.

Ms. Posnock's performance experience is wide and varied. She has been featured as a concerto and recital soloist, as well as a chamber musician, collaborating with musicians from the New York Chamber Ensemble, the Chamber Orchestra of Europe, the Academy of St. Martin-in-the-Fields, as well as her hometown ensemble – the Bombay Chamber Orchestra. She has also participated in such international music festivals as the Brevard Music Center, the Casals Festival in Puerto Rico, the Cape May Music Festival, Musica Viva, and was a founding member of the Sangat Music Festival in Mumbai, India.

Ms. Posnock completed her undergraduate studies with Honors at the Royal College of Music, London, and her Master’s Degree at Carnegie Mellon University in Pittsburgh, where she studied with renowned flutist and pedagogue Jeanne Baxtresser, former Principal Flute of the New York Philharmonic. While in Pittsburgh, she performed regularly with ensembles including the Pittsburgh Symphony, the Pittsburgh Ballet, and Pittsburgh Opera, and was Director of the Artist Diploma Program at the Carnegie Mellon School of Music.

Ms. Posnock has a deep passion for teaching. She has served as Artist Lecturer in Flute at CMU, is currently Artist Faculty at the Brevard Music Center and Brevard College, and woodwind coach for the Asheville Symphony Youth Orchestra. She lives in Brevard, NC with her husband Jason, and two children. She is solo piccolo of the Asheville Symphony Orchestra, and travels back to India to perform as Principal Flute with the South Asian Symphony Orchestra.