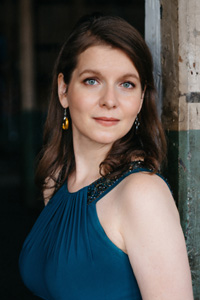 Praised by The New York Times for her “thoughtful musicality” and “fleet-fingered panache,” Liza Stepanova is in demand as a soloist, collaborator, and educator. In the fall of 2020, she was named Musical America Worldwide's "New Artist of the Month," a rare distinction celebrating her work and particularly the impact of her recent CD "E Pluribus Unum."  In addition to joining the Brevard faculty, other 2022-23 season highlights include a return to the Bowdoin and Songfest music festivals, solo performances as an invited headliner at the TMTA State Conference, at the American Liszt Society Festival and across the Southeast, and chamber music tours with the Lysander Piano Trio at Dumbarton Oaks in Washington, in New York City, Arizona, Florida, Mississippi, Wyoming, and in Canada.

In August 2020, Stepanova released her second solo album "E Pluribus Unum" (Navona Records) celebrating contemporary American composers with an immigrant background. The CD, which features a commission and three world-premiere recordings, received universal acclaim with reviews in the top three British classical music journals: Gramophone, BBC Music Magazine, and International Piano, as well as The Whole Note in Canada and Piano Magazine in the US. The disc was broadcast widely on national and international radio including "Album of the Week" on Canada's public radio, several plays in Australia, and across the US. Stepanova’s debut solo album “Tones & Colors: Music and Visual Art” (CAG Records, 2018), recorded in New York City with Grammy-winning producer Adam Abeshouse, brought together music from Bach to Ligeti that was inspired by visual art. This record was also praised in international media and continues to be regularly played on American Public Media's Performance Today, the most listened-to daily classical music program in the United States, including multiple features as a headliner.

Stepanova has performed extensively in Europe, most recently, as a soloist with the Southwest-German Philharmonic and in chamber music performances at the Berlin Museum of Musical Instruments, at the Copenhagen Music Festival, and in Belgrade’s Kolarac Hall. In the United States, she has appeared in Weill and Zankel Recital Halls at Carnegie; Alice Tully Hall, Merkin and Steinway halls in New York City; at the Kennedy Center and The Smithsonian in Washington, DC; and live on WQXR New York, WFMT Chicago, and WETA Washington. Stepanova has twice been a soloist with the Juilliard Orchestra led by James DePreist and Nicholas McGegan and was a top prizewinner at the Liszt-Garrison, Juilliard Concerto, Steinway, and Ettlingen competitions. As a soloist and chamber musician, she has been invited to international festivals at Castleton, La Jolla, Music@Menlo, Mostly Mozart, Copenhagen (Denmark), and Davos (Switzerland), where she had opportunities to collaborate with leading artists including violinist Cho-Liang Lin, violist James Dunham, clarinetist Charles Neidich, soprano Lucy Shelton, mezzo-soprano Susanne Mentzer and members of the Berlin Philharmonic, New York Philharmonic, and the Atlanta Symphony. Deeply committed to new music, she has premiered works by Jennifer Higdon and Libby Larsen and worked with composers William Bolcom, Gabriela Lena Frank, and John Harbison.

As a member of the Lysander Piano Trio, Stepanova won the Concert Artists Guild International Competition and received top prizes a the Coleman and Fischoff Chamber Music Competitions. The ensemble recently celebrated its tenth anniversary with a new album "Mirrors" (First Hand Records, UK) dedicated to works the group either commissioned or premiered, including a world-premiere recording of a work by Jennifer Higdon. Lysander has performed at all major venues in New York City including Carnegie Hall and David Geffen Hall as part of the Mostly Mozart Festival to enthusiastic reviews in The New York Times and The Washington Post. Highlights of Lysander's recent tours include the Krannert Center for the Performing Arts; Purdue University’s Convocations Series, Los Angeles’ Clark Memorial Library at UCLA and the Da Camera Society; Chicago’s Dame Myra Hess Concert series and Rockford Coronado Concerts; San Francisco’s Music at Kohl Mansion; and Juneau Jazz and Classics (AK). Liza Stepanova studied art song collaboration with Wolfram Rieger in Berlin and was invited by the late Dietrich Fischer-Dieskau to perform in several of his master classes including the Hugo-Wolf-Tage festival in Austria. Since 2010, Stepanova has been on the faculty at SongFest at The Colburn School in Los Angeles and also served as the festival’s Associate Artistic Director and Piano Program Director for two years.

Stepanova received her DMA from The Juilliard School with a Richard F. French Award for outstanding doctoral work. Previously a graduate of the Hanns Eisler Academy in Berlin, Germany, she studied with Joseph Kalichstein, Seymour Lipkin, Jerome Lowenthal, and George Sava, and performed in master classes for Alfred Brendel, Daniel Barenboim, and András Schiff. Following teaching positions at The Juilliard School and Smith College, she is currently an associate professor of piano and piano area chair at the University of Georgia, Hugh Hodgson School of Music, where she also co-directs the biannual Chamber Music Athens festival featuring acclaimed artists performing and teaching alongside UGA faculty and students. Her UGA students have been invited to the Aspen, Bowdoin, Brevard, Chautauqua, and Salzburg Mozarteum summer programs and received scholarships to elite graduate programs. Recent student successes include top prizes at the Liszt-Ohio International Competition, GMTA, MTNA, Atlanta Music Club, and Atlanta Mozart Society competitions, and a finalist award at the Wideman International Piano Competition.