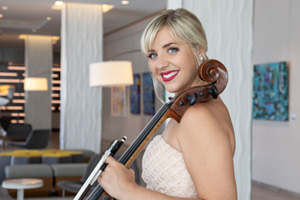 Principal Cello of the Sarasota Orchestra, American cellist Natalie Helm has been praised as having a sound that “catches the attention of the room" and "leaves a lasting impression". LA Times proclaimed the audience "was transfixed" by her performance that was "handled ardently." A cellist of extraordinary versatility, Ms. Helm enjoys a dynamic career as a soloist, chamber musician, orchestral musician, and educator.

Ms. Helm’s recent engagements include solo appearances with the National Music Festival Orchestra, Sarasota Orchestra, Dana Point Symphony, and Montgomery Symphony Orchestra. Natalie’s goal to create exciting and innovative concert experiences has inspired the P.E.R.M.A. Concert Series: Music and Positive Psychology, Bach Immersion: the Bach Suites in collaboration with other art forms, and Her Journey: An all female composer program. Chamber appearances include recitals throughout the UK and US with the genre-crossing DuoSkope and Sorella Duo. Recently releasing her first album, you can find Ms. Helm on iTunes, Amazon Music, and Spotify.

A top prize winner at international competition, Ms. Helm has had the opportunity to perform internationally throughout Italy, Germany, and Japan. She toured the United States performing in over 30 cities in 3 weeks. Ms. Helm’s performances have been broadcast on NPR, iHeart Radio, Fox News, and PEOPLE Magazine.

Born in Louisville, KY, Ms. Helm began studying the cello at age eleven. After only five years of playing the cello, she was accepted into the prestigious Curtis Institute of Music studying with Peter Wiley and David Soyer. Ms Helm also holds an Artist Diploma from the Colburn School of Music where she studied with Ronald Leonard. Natalie spends her summers on faculty at Brevard Music Center, Interlochen Arts Camp, and Curtis Institute of Music’s Summerfest.  She has given masterclasses at University of Southern Florida, Miami University, Frost School of Music, and is on faculty at the Sarasota Music Conservatory.

Ms. Helm plays on a Raphael di Blasio cello from 1803.