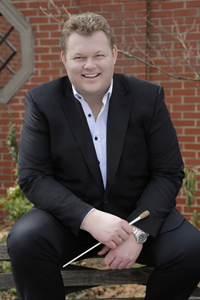 Guest engagements in the 2022/23 season bring Bergmann once again to the podiums of the Baltimore, North Carolina and Malaga Symphony Orchestras. He will also make his debut with the recently formed ADDA Simfonica in Spain.

2018 saw the release of Bergmann’s first recording with the Szczecin Philharmonic, which featured the „Resurrection“ Symphony in E-minor by Mieczyław Karłowicz, a piece which has since become a major focus of Bergmann’s repertoire. He has also released recordings with the Argovia Philharmonic, including Ravel’s G-Major Piano Concerto and Mozart’s Bb-Major Bassoon concerto.

Earlier in his career, Rune Bergmann served as First Kapellmeister and deputy-Music Director of the Theater Augsburg, where he led performances of numerous operas, including such titles as La Traviata, Der fliegende Holländer, and Die Fledermaus. He has also served as Principal Guest Conductor of the Kaunas City Symphony, and has been Artistic Director of Norway’s innovative Fjord Cadenza Festival since its inception in 2010.