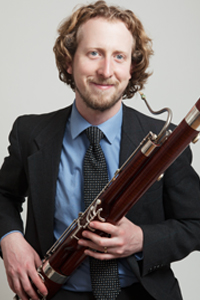 Heralded a “bold, emergent, personality” by the Philadelphia Inquirer, Harrison Hollingsworth is widely regarded as one of the premier wind players of his generation. In addition, he is Principal Bassoon of the New York City Ballet Orchestra at Lincoln Center, and is much in demand as a principal bassoonist, chamber musician, soloist, and pedagogue. Harrison has performed concertos with the Philadelphia Orchestra and Symphony in C, among others, and plays recitals everywhere from the Kennedy Center to La Mortella in Ischia, Italy. He has also played with the Metropolitan Opera, Orpheus Chamber Orchestra, and the Orchestras of St. Luke’s, Mostly Mozart, and the Chautauqua Symphony, among others. Harrison also plays fiddle and writes original music with his Downtown Folk Band.

An enthusiastic chamber musician, Harrison has toured across the country as a founding member of the eclectic Sixth Floor Trio, directing Miami’s GardenMusic Festival, performing with the orchestras of Detroit and Louisville, and presenting more than a hundred Random Acts of Culture™. He has also performed with Jupiter Symphony Chamber Players, and the Kingston, Olympic, Bay Chamber, Chesapeake, and Twickenham Music Festivals, among many others. He was also a founding member of the seminal Reed5, the first professional reed quintet in the Western hemisphere. As a pedagogue, Harrison has taught classes at the Manhattan School for Music, Mannes College, and the Chautauqua Music Festival, and he has adjudicated competitions and auditions at the Juilliard School.

Harrison lives in New York City with his wife Leah, a violist and writer, and their three children.