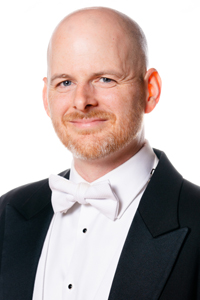 A native of Dallas, Texas, Steve began his musical education studying piano at age 5 and later started percussion when joining the school band program in sixth grade. He earned degrees from Southern Methodist University (B.M.) and the New England Conservatory of Music (M.M.) where his teachers included Doug Howard, Drew Lang, and Will Hudgins. Steve also studied percussion and timpani privately with Ed Stephan while performing and teaching in the Dallas/Fort Worth area before moving to Jacksonville.

Steve enjoys the versatility of percussion and spends time studying and performing music of many different styles and genres. As a tabla player, he has performed North Indian classical music and studies with Nikhil Pandya of the Lucknow gharana. Steve has traveled to Indonesia to study gamelan music and has performed at the Payangan Festival in Bali. While living in Boston, he and his wife Michelle were members of Gamelan Galak Tika, a Balinese gamelan which performs traditional gamelan music as well as music by contemporary composers (sometimes in collaboration with musical robots). Steve has also performed as a vibraphonist and drum set player in various jazz groups.

When not working, Steve spends his time at home or traveling with his wife Michelle and their two sons, Davis and Emmett.