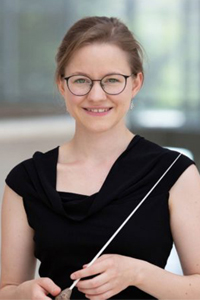 Austrian conductor Katharina Wincor, recipient of the Neeme Järvi Prize at the Gstaad Menuhin Festival in 2017, was born in 1995 and trained as a pianist and oboist while attending the Senior High School of Music, Linz (Austria). She studied composition at the Anton Bruckner Private University in Linz from 2009 to 2014.

In 2017, she was invited by Riccardo Muti to be the youngest of five participants at his Italian Opera Academy, and in 2018 she was invited as the youngest competitor of the world-renowned Donatella Flick LSO Conducting Competition in London. Wincor is currently preparing to conduct Tonhalle Orchester Zürich in a masterclass with David Zinman and attend the Aspen Music Festival and School as a Conducting Fellow in summer of 2019.

Recent notable projects include working as the Assistant Chorus Master for Arnold Schoenberg Choir Vienna from 2016 to 2018 and assisting Mirga Gražinytė-Tyla at the Salzburg State Theatre.

Since 2014, Wincor has studied Orchestral Conducting in Vienna at the University of Music and Performing Arts with Professor Mark Stringer, and was invited to study as an exchange student at the Franz Liszt Weimar School of Music for the 2017/18 school year. She is currently continuing her studies at the Zurich University of the Arts with Professor Johannes Schlaefli. Wincor has participated in masterclasses with Marin Alsop, Bernard Haitink and Jaap van Zweden.

In 2012, Wincor founded her own choir, Bunte Steine, which has won national and international competitions, and with whom she works regularly.