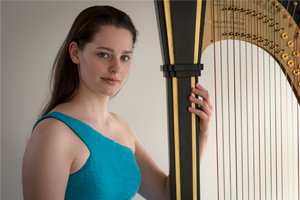 One of the brightest young stars of the harp, Abigail Kent is an international award-winning harpist, hailed as “superb” by the South Florida Classical Review and praised for her “immaculate playing and musical sensitivity” in Fanfare Magazine’s review of the Taylor Festival Choir’s 2020 album “So Hallow’d the Time.” Kent was the February 2018 “New Artist” for Musical America International Magazine as well as the touring Harp Ambassador as “Concert Artist” for the American Harp Society 2017-19. With this prize, she presented 25 solo recitals and taught 18 masterclasses throughout the US.

She was also a featured harp soloist for the 2017 World Harp Congress in Hong Kong, a Laureate Finalist at the 2017 Classics Alive management search in Los Angeles, the 2019 Silver Medal at the Medallion International Concerto Competition, and most recently a Live Finalist for the Young Concert Artist International Auditions in 2020.

In addition to her success as a concert soloist, Ms. Kent is also in high demand as an orchestral harpist. She is Acting Principal Harpist for the Charleston Symphony Orchestra, Principal Harpist for “Symphony in C” Orchestra in New Jersey, and plays often with the New World Symphony. Additionally, she has performed at international summer music festivals including Spoleto Festival USA, Pacific Music Festival (Sapporo, Japan), National Repertory Orchestra, and the Aspen Music Festival. Her career has taken her across the globe to perform in venues such as Carnegie Hall, the Mozarteum in Salzburg, and Konzerthaus in Berlin, and work under the batons of Valery Gergiev, Yannick Nézet-Séguin, and Osmo Vänskä, among others.

A committed pedagogue, her love of teaching stemmed from hosting masterclasses during her two years as Concert Artist. Ms. Kent is on faculty at the Charleston Academy of Music and “Circle Circle” Arts Academy (New York City) and manages a private teaching studio. Most recently, she was appointed as harp faculty at College of Charleston, where she has created two unique pathways in harp: traditional lever harp and classical pedal harp. She has given masterclasses and lectures for the American Harp Academy, the 2019 American Harp Society National Institute, University of Denver, University of North Texas, the Curtis Institute of Music, and The Juilliard School.

An avid proponent of new music, she has premiered commissioned works and solos written for her including dahlianum by Andrew Hsu, The Star at Night and The Angel at Dawn by Ben Yee-Paulson, and The Tolstoy Trio by Nicholas Bentz.