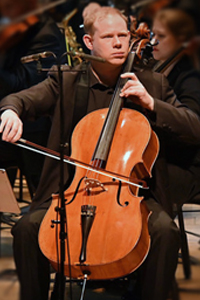 Benjamin Hughes, Principal Cello of the BBC Concert Orchestra, is one of the UK’s most dynamic and versatile cellists.  He has been Principal Cello of the BBC CO since 2007 and appears regularly on BBC Radio and Television as a soloist with the BBC CO. He has performed Tchaikovsky’s Rococo Variations with Johannes Wildner and Gulda’s Cello Concerto with Keith Lockhart live on BBC R3 and also featured as a soloist at the BBC Proms. He is also in demand as a chamber musician and has performed regularly with the Fibonacci Sequence at venues such as the Wigmore Hall, King’s Place, Conway Hall in London and the Australian Festival of Chamber Music in Townsville, Australia.  Benjamin has recorded works by Messiaen, Schubert, Elgar and Brahms with the Fibonacci Sequence for Deux-Elles and Dutton labels. He is equally at home playing Bach, Bartok or Brubeck.

He took his undergraduate studies at the Royal Birmingham Conservatoire with Michal Kaznowski where he won all the major prizes for cello. He then took up a place to study at the Hochschule für Künste in Bremen with the internationally acclaimed cellist and teacher Alexander Baillie. During his time there, he gave solo recitals and concerto performances including live broadcasts for Radio Bremen and Deutschland Radio, Berlin, and performed with the Bremen Philharmonic Orchestra and the Deutsche Kammerphilharmonie Bremen.

After his time in Germany, he went on to the Eastman School of Music, studying with Steven Doane and Rosie Elliott on the Master’s Programme. After returning to the UK he gained a Post Graduate Diploma from the Royal Academy of Music where he continued his studies with Steven Doane and Colin Carr.

Aside from performing he has made two instruments; a natural acoustic kind of Cello with an unusual body shape, which won a national design competition. A semi-acoustic electric version followed which Benjamin featured on a BBC Radio 3 programme dedicated to the progress of electronic music called ‘Electronica’. He also performed on it as the electric cello soloist in performances of Planet Earth 2 live, at the Royal Albert Hall with Jessica Cottis and Hans Zimmer.