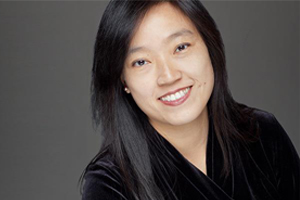 Pei-An Chao has been a full-time member of the Columbus Symphony (CSO) since 2000. She was appointed Assistant Principal Cello for the 2009-2010 season and was featured as a soloist in 2011. Since 2008, she has led the cello section as principal on several occasions. Prior to joining the CSO, Ms. Chao spent two years with the New World Symphony, a training orchestra in Miami, FL designed to help young musicians pursue orchestral careers. She holds a bachelor's degree from the Manhattan School of Music in New York City and a master's degree from the San Francisco Conservatory of Music, where she was the concerto competition winner and graduated with distinction. Her major teachers were Marion Feldman and Bonnie Hampton.

Ms. Chao spent her childhood in Taipei, Taiwan and later moved to New York City. She began playing piano at age 4 and cello at age 9. Equally talented on both instruments throughout her musical training, she gained a broadened perspective of musical understanding beyond the limitations of each instrument.

Ms. Chao has appeared in prestigious festivals such as Tanglewood, Kent Blossom, Sarasota, Pacific, Spoleto, and Colorado. In addition to her CSO commitments, Ms. Chao is an active chamber musician and a dedicated teacher. She is a member of UCelli: The Columbus Cello Quartet and Cygnus String Quartet, and she can be seen in performance with her groups locally throughout the year. Her passion for new music started early in life, and she performs regularly with the Columbus Ohio Discovery Ensemble [CODE].

As a coach, Ms. Chao has worked with students of the Columbus Symphony Youth Orchestra (CSYO) and the Youth Philharmonic of Central Ohio as well as with local chamber music groups. She previously was a mentor for the New Albany Symphony. Each summer, she and her colleagues of UCelli host a popular week-long cello camp. Aside from keeping a busy private teaching studio, she has held teaching positions at Otterbein University, Ohio Wesleyan University, and Ohio University. Ms. Chao resides in Upper Arlington with her husband and two children.