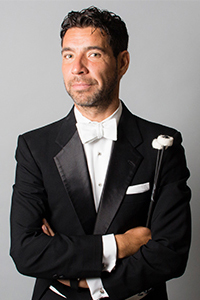 Leo has the unique distinction of being the first native Hispanic Timpanist to play in a major orchestra in the United States.

Leonardo has appeared as a soloist with the Charlotte Symphony, Amarillo Symphony and the Houston Symphony. In January 2017 he performed the world premiere of “Evolution Percussion Concerto,” written for him by composer Leonard Mark Lewis.

He began his musical education at the University of Chile and was the recipient of the Teatro Municipal of Santiago National Scholarship. Concurrently, he was trained as a Latin percussionist by his father, Mr. Leonardo Soto, Sr., one of Chile’s most prominent musicians in the field. Leo embarked on his professional career with the Santiago Philharmonic Orchestra and the National Symphony Orchestra of Chile, where he gained experience in orchestral, opera and ballet repertoire. In 1997, he received the Fundación Andes International Scholarship, which brought him to the US and Carnegie Mellon University, where he studied with Timpanist Timothy Adams from the Pittsburgh Symphony Orchestra. He was made an honorary student at Cleveland State University by Tom Freer of the Cleveland Orchestra.

Leonardo has worked with ensembles such as the Pittsburgh Symphony Orchestra, Detroit Symphony Orchestra, New World Symphony, City Music Cleveland, Fort Wayne Philharmonic, Toledo Symphony, Grand Rapids Symphony, among others. As a Latin percussionist, he has recorded and toured with a number of artists from the Pennsylvania, Southern Michigan and New York areas.