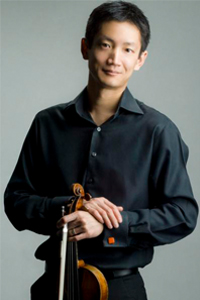 Associate Professor of Violin at Florida State University, violinist Benjamin Sung is also a Faculty Artist and violin coordinator at the Brevard Music Center, and principal second violin of the Brevard Music Center Orchestra. Recent concert highlights include the 2019 Brevard Music Festival; a complete Beethoven cycle with pianist David Kalhous; an appearance with the FSU University Symphony Orchestra in Piazzolla's Estaciones Portenas for the 2016 ASTA National Conference; and a TED talk for TEDx Fargo. Mr. Sung has an upcoming new solo album featuring works by Sciarrino, Berio, Maderna, and Schnittke; in the 2019-2020 season, he has engagements to play the 24 Caprices by Paganini in Canada, Taiwan, Brazil, and throughout the United States.

Sung has performed as a soloist with numerous orchestras, including the Camerata Romeu of Havana (Cuba), the Virtuosi of Festival Internacionale de Musica in Recife (Brazil), and the National Repertory Orchestra. He is equally in demand as a chamber musician, having shared the stage with great performers including pianist Monique Duphil, and cellists Antonio Meneses and Marcio Carneiro. He is a past winner of the Starling Award of the Eastman School of Music and the Violin Fellowship of the Montgomery Symphony, and an Aaron Copland Fund Recording Grant.

An enthusiastic advocate of contemporary music, Sung has recorded the music of composers Steve Rouse and Marc Satterwhite for Centaur Records, has performed and taught for Studio 2021 at Seoul National University, and has worked with many of the greatest composers of this generation, including John Adams, Pierre Boulez, George Crumb, and Helmut Lachenmann. In 2012, he released an album of new American works entitled FluxFlummoxed on Albany Records, a recording hailed by Fanfare Magazine as "a brilliant performance of four superb works" with "impeccable intonation and tone production."

Sung holds a Bachelor’s degree from the Eastman School of Music, where he studied with Oleh Krysa, and Master’s and Doctorate degrees from the Indiana University Jacobs School of Music, from the studio of Nelli Shkolnikova. Sung also studied at the Professional Training Program at Carnegie Hall, the Lucerne Festival Academy, the New York String Seminar, and the Chamber Music Residency at The Banff Centre. Benjamin lives with his wife Jihye and son Aiden in Tallahassee, Florida, where he enjoys running, watching Aiden climb through the Suzuki sequence, and everything that comes out of Jihye’s kitchen.