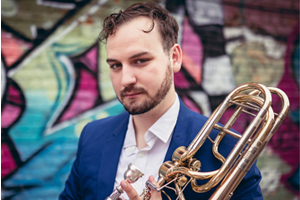 Recently hailed by International Trombone Journal as someone whose “ warm sound, beautiful phrasing, and ability to perform in various styles convincingly sets him apart as a truly exceptional musician”, Chris Glassman is a rising star jazz performer on bass trombone, and Michigan based musician. He has performed and/or recorded with legendary musicians The Temptations, Sarah McLachlan, Dee Dee Bridgewater, Rene Marie, Wayne Bergeron, Rodney Whitaker, Ulysses Owens Jr., and Etienne Charles among others, and is on Faculty at both Saginaw Valley State University, and the Michigan State University Community Music School in Detroit.

Raised in Littleton, Colorado, Chris has been passionate and engaged in music since the age of five when he began learning drums from his father. He later transitioned into playing the trombone during grade school, and was enchanted with the instruments gorgeous sound, unique abilities, and outstanding universality. Glassman is deeply rooted in the classical tradition of trombone, having received his Bachelor’s in Classical Trombone Performance from the University of Denver. He went on to a Teaching Assistantship and Master’s in Jazz Studies at Michigan State University with legendary pedagogues Michael Dease and Rodney Whitaker. Between 2017-2019, during his Master’s, Chris was a finalist or won every international competition for jazz trombone in the United States, a feat which he accomplished on Bass Trombone nonetheless. These competitions included the International Trombone Festival’s Carl Fontana, JJ Johnson, and Kai Winding Competitions, the American Trombone Workshop Jazz Trombone Competition, Curtis Fuller International Trombone Competition, and the UNT Jazz Trombone Day Competition. He was also a finalist for the U.S. Army Blues Bass Trombone audition in 2017. Glassman capped off his time at MSU by receiving over $3000 in grant funding to create a free performance series designed to engage students age 5-12 in Jazz Music.

Since then, Chris has been hard at work continuing his upward trajectory in the greater community. His recent debut “Realization” with his co-led ensemble with Altin Sencalar, The Sencalar/Glassman Quintet, has recently received high acclaim from magazines like Stereophile Magazine, The International Trombone Journal, and Outside in Music. In addition, The Sencalar/Glassman Quintet has begun releasing a series of singles entitled “The Solitude Sessions”. He is also a featured sidemen in the recently released Walter White Big Band album WWBBXL featuring Wayne Bergeron, Conrad Herwig, Rick Margitza, and Micheal Dease. Also an avid arranger, Chris has recently had numerous commissions for arrangements and compositions by Brevard Music Center, the Dr. Phillips Center for the Performing Arts, and for musicians David Sanborn, Rodney Whitaker, Randy Napoleon, Steve Davis, and Michael Dease among others. Not content with just performing, Glassman is also Adjunct Professor of Jazz at Saginaw Valley State University, and head of Low Brass at Michigan State University’s Community Music School in Detroit, where he continues to mentor both burgeoning Jr High, High School, and University students. He also continues to create digital performances, educational videos on his personal YouTube Channel weekly, and continues to interview jazz legends like Rufus Reid on his interview show “8vbebop”.