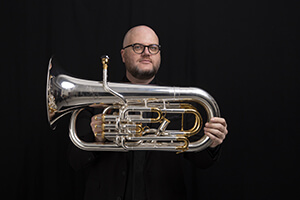 Cale Self is Associate Professor of Music, Assistant Director of Bands, and Instructor of Euphonium & Tuba at the University of West Georgia in beautiful Carrollton, GA. Also serving as the Director of Athletic Bands, Dr. Self directs “The Sound That Lights the South” Marching Band and the “Wolfgang” Basketball Pep Band. He also conducts the UWG Symphonic Band, Brass Ensemble, and Tuba Ensemble.

An advocate for new music, Dr. Self has participated in commissioning consortiums that have resulted in over twenty new works for euphonium, tuba, or concert band over the past eight years, and has performed or conducted premiere performances of thirteen of those pieces. Recent commission projects include Norman J. Nelson’s October in July, and Katahj Copley’s Limitless that was a consortium commission from the new Tuba Euphonium Social Justice Initiative.

Dr. Self is an artist affiliate with the Andreas Eastman and Parker Mouthpieces companies. He remains active in the state of Georgia and throughout the Southeast as a soloist, ensemble musician, conductor, clinician, and adjudicator.