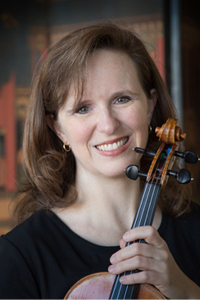 Violinist Corinne Stillwell entered the Juilliard School at the age of ten, where she subsequently earned her Bachelor's and Master's degrees, working with Dorothy DeLay, Samuel Sanders, Joel Smirnoff, and Earl Carlyss. A versatile musician, she is equally at home as soloist and chamber musician, and has spent nearly 25 years as a concertmaster and orchestral leader. She has performed at Carnegie's Weill Hall, Chicago's Dame Myra Hess series, and Germany, Canada, and across the United States. Concerto appearances include the New Jersey Symphony, Greater Rochester Women's Philharmonic, Amarillo Symphony, and on tour in China, Romania, Hungary and Poland.

Ms. Stillwell has collaborated with Richard Stoltzman, David Shifrin, Robert Levin, Pepe Romero, Mikhail Kopelman, and members of the Pro Arte, Cavani, and Ying quartets. She has also performed at Alice Tully Hall, the Chamber Music Society of Lincoln Center, Kosciuszko Foundation, and the American Festival of Microtonal Music. Summer festival appearances include Saarburg (Germany), Aspen, Norfolk, Skaneateles, and Victoria Bach. As a member of the Harrington Quartet, she performed extensively across the Southwest, including Dallas, Austin, Houston, Albuquerque, and at the International Festival-Institute at Round Top. She also toured Wisconsin, Minnesota, Nebraska, and Colorado, and was featured on a PBS documentary. From 2002-2007, Ms. Stillwell served as Assistant Concertmaster of the Rochester Philharmonic. She was a founding member of Quartos, and appeared regularly with Chamber Music Rochester and Eastman faculty. Frequently heard on live radio broadcasts, she was also the Director of Chamber Music at the Hochstein School.

Ms. Stillwell is currently Associate Professor at Florida State University, faculty at the Brevard Music Center, a founding member of Trio Solis, and Concertmaster of the Tallahassee Symphony. She has recorded for Harmonia Mundi, Naxos, and MSR Classics.