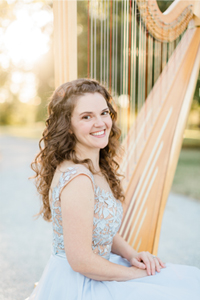 Allegra Lilly joined the St. Louis Symphony as Principal Harp in 2013. She has appeared as Guest Principal Harp with the Chicago, Houston, Toronto and Charlotte symphonies, Boston Pops, and St. Paul Chamber Orchestra, and has also performed with the New York Philharmonic, Pittsburgh Symphony, and All-Star Orchestra. A frequent substitute with the Boston Symphony, she acted as Guest Principal Harp for the BSO’s 2015 Tanglewood season and European tour, and she has earned the unique distinction of appearing as Principal Harp on back-to-back albums that won the GRAMMY Award for Best Orchestral Performance: the SLSO’s City Noir in 2015 and the BSO’s Shostakovich: Under Stalin’s Shadow in 2016.

In addition to holding the harp faculty position at Brevard Music Center since 2017, Lilly has given masterclasses at Northwestern University, Tanglewood Music Center, Boston University, and the University of Ottawa. She has also coached orchestral and chamber music for New World Symphony and the preparatory divisions of The Juilliard School and New England Conservatory. Born in Detroit, Lilly began her own study of the harp with Ruth Myers at age seven. She went on to join the studio of New York Philharmonic Principal Harpist Nancy Allen at The Juilliard School, where she earned Bachelor and Master of Music degrees.