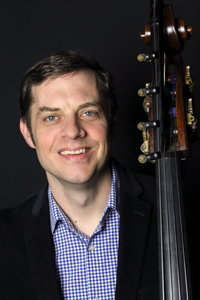 Bassist George Speed enjoys a career that combines teaching with solo, chamber, and orchestral performing. He is Assistant Professor of Bass at Florida State University and Principal Bass of the Tallahassee Symphony. 2021 marks his 5th summer on the artist faculty of the Brevard Music Center.

From 2005-2019, Mr. Speed served as Professor of Double Bass at Oklahoma State University and Principal Bass of the Oklahoma City Philharmonic. Prior to his appointment with the OKC Philharmonic, Mr. Speed held a tenured position with the Florida Philharmonic Orchestra. He has also performed with the Boston Pops, Boston Symphony, Dallas Symphony, Fort Worth Symphony, and Handel and Haydn Society.

Mr. Speed is passionate about both chamber music and solo performance. From 2005-2019 he performed with the Oklahoma City-based chamber ensemble Brightmusic. In 2018, Centaur Records released Mr. Speed’s recording of his Vivaldi cello sonata 1-6 transcriptions. He is currently working with pianist Heidi Louise Williams on an album of classical era works for double bass and piano, also to be released by Centaur.

A devoted educator, Mr. Speed received the 2009 Wise-Diggs-Berry Award for Teaching Excellence in the Arts at Oklahoma State University. In 2005, he was a co-founder of the Oklahoma Bass Bash, a summer clinic for Oklahoma pre-college bassists, and he currently coordinates the Double Bass Workshop for the Summer Music Camps at FSU.