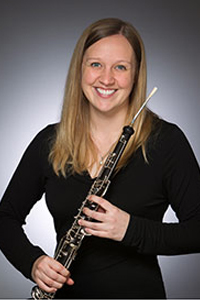 Emily Brebach joined the Atlanta Symphony Orchestra as English horn and Oboe in the fall of 2012. A native of Philadelphia, she has performed with several orchestras throughout the United States, including the Boston Symphony Orchestra, the Minnesota Orchestra, the Kansas City Symphony, and the Houston Symphony. Prior to joining the ASO, Ms. Brebach held the position of English horn and oboe with the Sarasota Orchestra. She is a faculty member of the Atlanta Symphony's Talent Development Program, an Artist Affiliate Instructor of Oboe at Emory University, and maintains an active private studio in her home.

Ms. Brebach has also given masterclasses and reedmaking seminars at music schools across the country, including the University of Cincinnati College-Conservatory of Music, Florida State University, the University of Minnesota, the North Carolina School for the Arts, Columbus State University, and the University of Houston. She spends her summers in residence at the Brevard Music Center in Brevard, NC, as English horn and oboe as well as artist faculty, and also as English horn at the Grand Teton Music Festival. She is also one of the founding members of The Merian Ensemble, a quintet of Atlanta Symphony woman musicians dedicated to commissioning and performing works by women composers.