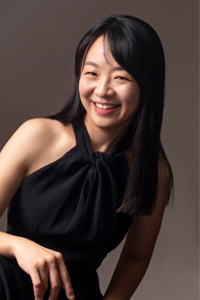 Ms. Chang has showcased her versatility and excellence on many prestigious stages with renowned musicians, including Frank Cohen (clarinet), Richard Young (viola/violin), and Bion Tsang (cello). She was also a guest artist at the Virtuosi Festival in Recife and Festival Inverno de Garanhuns in Brazil and Arts Festival Olivet in France. Her recent engagements include an appearance at the Fort Worth Chamber Music Society, a lecture and solo performance for the Guest Artist Series at Converse College, performance for Minnesota State University Moorhead’s Dante-The Divine Comedy Project, and numerous appearances at the Cummer Museum and Museum Of Contemporary Arts in Jacksonville. In the 2016-2017 season, she launched a multi-year solo recital project, “Continuum 88,” commissioning and premiering works related to the most prominent genres of piano literature. This project began with a program entitled “Preludes Plus” at Framingham State University’s Noontime Concert Series, and will continue with premieres and commissioning of composers across the world on stages in Seoul (Korea), Nashville, Fort Worth, and Asheville among others. This season also features the world premiere of Robert Aldridge’s Piano Concerto No. 2 at the Brevard Music Center.

Together with violinist Benjamin Sung, Ms. Chang was one of the recipients of the 2009 Aaron Copland Fund Recording Grant. They recorded four pieces for violin and piano by young American composers, three of which were written for them, and the album was released on Albany Records in June 2013. She was also the first winner of the Mikhashoff International Competition for Pianist-Composer Collaboration in 2008, and gave her winner’s recital at the Hallwalls Contemporary Art Center in Buffalo, NY. Other awards and honors include the Henry Kohn Award for outstanding achievement at the Tanglewood Music Center, an Honorary Fellowship from the Montgomery Symphony Orchestra, the President’s Award from Seoul National University, and the Grand Prize from the Samick Piano Competition, Korea. As a recording artist, she has released several commercial CDs including “Piano for Easy Listening” on Sony/ BMG Korea, “Classics for Children” on Seoul Record, Korea, and a solo piano collection for children ("I am Piano") from Universal Korea. She also curated a collection of 12 CDs entitled “12 Months of Classical Music” for Sony Music Korea. Most recently she recorded Steve Rouse’s Sonata for Violin and Piano, written for herself and violinist Benjamin Sung, for the Parma label.

An avid performer of new music, Ms. Chang has been a frequent guest artist of the Studio 2021 Series at Seoul National University, and new music festivals at Ball State University and the University of Louisville. Most recently she was a guest artist at Florida State University’s Ligeti Festival, New Music Festival, and John Cage Festival. She has premiered more than thirty works, many of them written for her, and has closely worked with David Dzubay, John Harbison, George Perle, Steve Rouse, Marc Satterwhite, and Gunther Schuller, among others. Her doctoral research on the etudes of György Ligeti and Unsuk Chin has evolved into an ongoing series of lectures and recitals exploring the piano etudes and miniatures of the 20th and 21st centuries, which she has presented at Indiana University, University of Louisville, Seoul National University, Florida State University, and Auburn University Montgomery. This research interest also developed into a lecture series on the subject at the Brevard Music Center. In 2017, she will present special lectures on this subject at Seoul National University and Korea Advanced Institute of Science and Technology.

Ms. Chang holds the degrees of Doctor of Music and Master of Music in Piano Performance from the Jacobs School of Music at Indiana University under the tutelage of György Sebök, Reiko Neriki, and Edward Auer. She received her Bachelor’s degree summa cum laude from Seoul National University. She also had the privilege to study with Emanuel Ax, Marc Durand, Claude Frank, Pamela Frank, Robert Levin, Yo Yo Ma, Ursula Oppens, and John Perry at the Tanglewood Music Center, Banff Centre’s Chamber Music Residency, Orford Festival, and Sarasota Music Festival. She has served as a faculty member at Concordia College, MN, North Dakota State University, and Troy University AL, and as the Artist in Residence for the Rosemary Beach Foundation's "Music In Pictures," supported by Florida Division of Cultural Affairs in the past.

Ms. Change has served as Visiting Assistant Professor at Florida State University's College of Music and is on the piano faculties of the Brevard Music Center and the Nuevo Mundo Festival Aruba. She is also a core member of Intersection Contemporary Ensemble in Nashville.

She resides in sunny Tallahassee with her husband, violinist Benjamin Sung, and their amazing baby boy, Aiden. In her leisure time Jihye enjoys drinking good espresso, cooking, and eating.