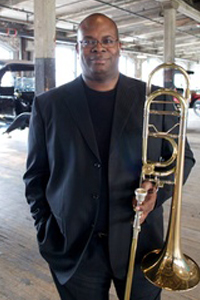 David Jackson, Professor of Trombone at the University of Michigan School of Music, enjoys an active career as a performer and teacher. He is a recognized and ardent supporter of new music who has commissioned and premiered numerous compositions for the trombone. His most recently commissioned and debuted Angel of Dreamers, by Eric Ewazen, for trombone, baritone voice and strings, and John Henry's Big by Adolphus Hailstork for trombone and piano.

Mr. Jackson has been a guest performer with numerous orchestras, including the Detroit Symphony, Pittsburgh Symphony, Dallas Symphony, Chicago Symphony, Fort Worth Symphony, Grand Rapids Symphony, New World Symphony, as well as the Michigan Opera Theatre and the Cabrillo Music Festival. He is a member of the Detroit Chamber Winds.

In demand as a guest clinician and performer, Mr. Jackson has presented numerous guest recitals and masterclasses at institutions including the Juilliard School, Yale University, UCLA, University of Minnesota, the Cincinnati College-Conservatory as well as the conservatories of Shanghai and Beijing. His former students occupy performing and teaching positions around the world.

Mr. Jackson has been on the faculties of Baylor University, Eastern Michigan University, the University of Toledo, the Interlochen Arts Camp and the Idyllwild ChamberFest. He spends his summers teaching and performing at the Brevard Music Center. Mr. Jackson is an S. E. Shires artist and clinician.