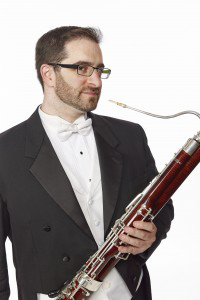 Originally from Morganville, NJ, Glenn Einschlag began his appointment as Principal Bassoonist of the Buffalo Philharmonic Orchestra in September of 1999. He has performed with such ensembles as the Philadelphia Orchestra, the Boston Symphony, the Indianapolis Symphony Orchestra, and the Colorado Music Festival Orchestra. As a soloist, Mr. Einschlag has played various concerti with the Ars Nova Chamber Orchestra, the Buffalo Philharmonic Orchestra, the Erie Chamber Orchestra, and the Buffalo Chamber Players, among others. An avid chamber musician, Mr. Einschlag has played with the Roycroft Music Festival, the Arizona Musicfest Chamber Players, the Wooden Cities Contemporary Ensemble, and has participated in many music festivals including those of Aspen, Tanglewood, Spoleto (USA), and Domaine Forget (Canada). He can be heard on the Beau Fleuve, Naxos, and EMI recording labels.

He has studied at The Juilliard School, The Curtis Institute of Music, and The Shepherd School of Music at Rice University and has been heavily influenced by the teachings of Harold Goltzer, Marc Goldberg, Bernard Garfield, William Winstead, Norman Herzberg, and Ben Kamins.