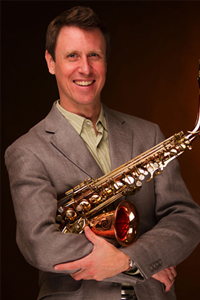 Saxophonist Henning Schröder has performed at major venues throughout Europe, Southeast Asia and the United States, both as a soloist and in groups as diverse as the Berlin Philharmonic Orchestra, Max Raabe & Palast Orchester, and Opus21. As baritone saxophonist of the acclaimed Capitol Quartet and with his duo partner, pianist Yu-Lien The, Dr. Schröder explores both the standard and contemporary repertoire of his instrument, constantly seeking to expand it in collaboration with composers. As a performer, composer and lecturer Dr. Schröder has been featured at international conferences in Europe and the US, most recently the 2015 World Saxophone Congress “SaxOpen” in Strassbourg, France, and the 2016 Biennial Conference of the North American Saxophone Alliance in Texas.

Beginning with his tenure at the University of Pelita Harapan in Indonesia, Dr. Schröder has developed a research interest in ethnomusicology, particularly focusing on the use of the saxophone in diverse music systems. His contributions to the 2014 book “Saxophon – Ein Instrument und sein Erfinder” reflect his broad interest in the history and diversification of the instrument. Moreover, he has devoted himself to the development and promotion of extended techniques, as they are frequently found in the modern repertoire of the instrument, such as circular breathing or slap tonguing. Through lectures and presentations as well as the composition of etudes, Dr. Schröder attempts to convince both performers and audiences of the saxophone's countless colors and effects.

A dedicated pedagogue, Dr. Schröder serves as Associate Professor of Music at Ohio Northern University, where he teaches saxophone, chamber music, music theory and music history. His five degrees in saxophone performance and saxophone pedagogy include the terminal Konzertexamen from the University of Arts Berlin as well as a Doctor of Musical Arts from the University of Illinois, where he worked with Johannes Ernst and Debra Richtmeyer, respectively. Additional mentors include Trent Kynaston and Chip McNeill.