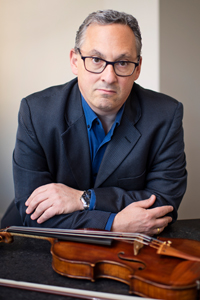 Violinist Jason Posnock enjoys a versatile musical career both in the United States and internationally. He has performed regularly in such prominent American ensembles as the Philadelphia Orchestra and the Pittsburgh Symphony Orchestra, and has accompanied them on tours to Europe, South America, the Far East and New York's Carnegie Hall. Mr. Posnock is also an active chamber musician and recitalist, having appeared in venues throughout the United States, England, Puerto Rico, and India.

In recent years Mr. Posnock has been invited to numerous chamber music and orchestral festivals. He has held principal positions at the Casals Festival in Puerto Rico and the Cape May Music Festival in New Jersey, and has taken part in Musica Viva (NJ) and the Sangat Music Festival in Mumbai, India, performing with leading musicians from the London Symphony Orchestra, the Chamber Orchestra of Europe, and the Orchestra of St. Martin-in-the-Fields. Regular festival appearances have included the Lancaster (OH) Festival, where he held the post of Assistant Concertmaster, Music On The Mountain (MD), and Music On The Edge, a contemporary music series in Pittsburgh. He has collaborated with such renowned artists as Emanuel Ax, David Krakauer, Ursula Oppens, Andrés Cárdenes, Andrés Díaz, and the American Chamber Players.

Originally from New Jersey, Mr. Posnock began taking violin lessons at the age of four. His early teachers included famed pedagogue Samuel Applebaum, and David Arben, Associate Concertmaster (retired) of the Philadelphia Orchestra. He attended Princeton University, graduating with honors in 1994, and went on to earn his ARCM(PG) from the Royal College of Music, London, where he studied with Felix Andrievsky. He continued his studies with Yumi Scott, member of the Philadelphia Orchestra, before completing the Performance Residency Program at Carnegie Mellon University in Pittsburgh as a student of Andrés Cárdenes, Concertmaster of the Pittsburgh Symphony Orchestra.

Concertmaster of the Asheville Symphony Orchestra since 2007, Mr. Posnock has previously held the positions of Concertmaster of the Clarksburg (WV) Symphony Orchestra and Concertmaster of the McKeesport (PA) Symphony Orchestra. He has often been invited to perform with the Pittsburgh Symphony, as well as serve as Guest Concertmaster of ensembles such as the Bangor, Roanoke, Erie, Westmoreland, and Altoona Symphony Orchestras. In addition to his performance schedule, Mr. Posnock has devoted much of his time to teaching and working with young musicians, serving on the faculty of the Brevard Music Center, as Artist Lecturer in Violin at Carnegie Mellon University, conductor of the Intrada Strings preparatory orchestra, and maintaining a busy teaching studio. He has also coached the violin sections of the Carnegie Mellon Philharmonic and the Three Rivers Young People's Orchestra. Presently Mr. Posnock resides with his family in Brevard, NC, serves on the faculty of Brevard College, and is the Vice President & Chief Artistic Officer at the Brevard Music Center.