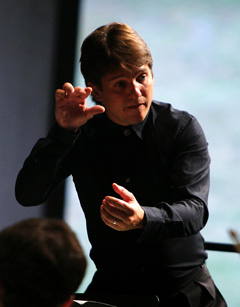 In 2007, Keith Lockhart succeeded David Effron as Artistic Director of the Brevard Music Center Summer Institute and Festival. Lockhart's appointment solidified an already special relationship with BMC; having attended as a teenager for two summers (1974, 1975), Lockhart was first featured as a guest conductor in 1996 and had since returned numerous times. He continues to serve as the Conductor of The Boston Pops Orchestra, and is Chief Guest Conductor of the BBC Concert Orchestra in London, having served for eight years as its Principal Conductor.

Keith Lockhart has conducted nearly every major orchestra in North America, as well as the Royal Concertgebouw Orchestra, the Deutsches Symphonie-Orchester Berlin, the NHK Symphony in Tokyo, and the Melbourne Symphony Orchestra. In October 2012, he made his London Philharmonic debut in Royal Albert Hall. In the opera pit, Maestro Lockhart has conducted productions with the Atlanta Opera, Washington Opera, Boston Lyric Opera, and Utah Opera. Recent highlights included debut appearances with the Czech Philharmonic, the Orchestra dell'Accademia Nazionale di Santa Cecilia in Rome, the Vienna Radio Symphony, and the Hong Kong Philharmonic. The 2017-2018 season saw Lockhart make his French debut with the Orchestre Nationale de Lille, and his Norwegian debut with the Stavanger Symphony Orchestra. Upcoming engagements include an ongoing relationship with the Czech Philharmonic, and returns to orchestras in Japan, Hong Kong, and Taiwan, as well as a debut with the Tonkuenstler Orchestra of Vienna. He also recently completed a recording of the Bernstein Serenade with violinist Anne Akiko Meyers and the London Symphony Orchestra.

In February 1995, Lockhart was named the 20th conductor of the Boston Pops Orchestra since its founding in 1885, succeeding John Williams and Arthur Fiedler. Now in his 24th season, he has conducted over 2000 concerts and made 80 television shows, including 38 new programs for PBS's Evening at Pops, and the annual July Fourth spectacular, broadcast nationally for many years. The Boston Pops' 2002 July Fourth broadcast was Emmy-nominated, and the Evening at Pops telecast of "Fiddlers Three" won the 2002 ASCAP-Deems Taylor Award. He has led the orchestra on four overseas tours of Japan and Korea, and 45 national tours in the US, reaching more than 150 cities in 38 states (including performances at Carnegie Hall, Radio City Music Hall, and sports arenas across the country) and extending to the pre-game show of Super Bowl XXXVI at the Louisiana Superdome in New Orleans. Since November 2004, he and the Boston Pops have released six self-produced recordings: 2017's Lights, Camera...Music! Six Decades of John Williams, A Boston Pops Christmas – Live from Symphony Hall, Sleigh Ride, America, Oscar & Tony, and The Red Sox Album. Keith Lockhart and the Boston Pops Orchestra have also recorded eight albums with RCA Victor – Runnin' Wild: Keith Lockhart and The Boston Pops Orchestra Play Glenn Miller, American Visions, the Grammy-nominated The Celtic Album, Holiday Pops, A Splash of Pops, Encore!, the Latin Grammy-nominated The Latin Album, and My Favorite Things: A Richard Rodgers Celebration.

Highlights of his tenure as the seventh Principal Conductor of the BBC Concert Orchestra (2010-2017) include critically acclaimed North American tours (2010/2011 and 2012/2013, and 2014/2015), conducting annual performances at The Proms, and celebrating the orchestra's 60th year in 2012. In June of that same year, Keith Lockhart conducted the orchestra during Queen Elizabeth II's gala Diamond Jubilee Concert, which was broadcast around the world.

In 2009, Keith Lockhart concluded eleven seasons as Music Director of the Utah Symphony. He led that orchestra through the complete symphonic works of Gustav Mahler, brought them to Europe on tour for the first time in two decades, and directed multiple appearances at the 2002 Olympic Winter Games. He stood at the front of that organization's historic merger with the Utah Opera to create the first-ever joint administrative arts entity of the Utah Symphony and Opera. Under his baton, the Utah Symphony released its first recording in two decades, Symphonic Dances, in April 2006, garnered an Emmy award for a "Salute to Symphony" regional broadcast, and performed in a national PBS broadcast of Vaughn Williams' oratorio Hodie.

Keith Lockhart served as Music Director of the Cincinnati Chamber Orchestra for seven years, completing his tenure in 1999. During his leadership, the orchestra doubled its number of performances, released recordings, and developed a reputation for innovative and accessible programming. Maestro Lockhart also served as Associate Conductor of both the Cincinnati Symphony Orchestra and the Cincinnati Pops Orchestra from 1990 to 1995.

More information is available at KeithLockhart.com.