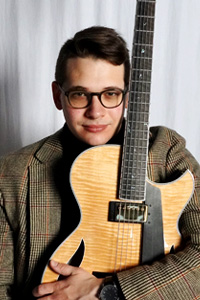 New York guitarist James Zito’s masterful touch and soulful melodies inspired Artslife Magazine to dub him “The Natural” a reference to Robert Redford’s starring take as the new baseball phenom Roy Hobbs. Born in Orlando, Florida, he is admired both for his authentic approach inspired by Wes Montgomery, Charlie Christian and Rodney Jones and his commitment to his personal, unique voice in Jazz.

Renowned conservatory Manhattan School of Music awarded Zito a scholarship and sparked his move to New York City. He has performed at Jazz At Lincoln Center’s Rose Hall, Dizzy’s Club Coca Cola, and the Caramoor Jazz Festival, along with many of the city’s top venues. Zito also draws upon his childhood influence of Rock and Gospel music, and his skill as a composer and arranger to engage with the versatile musical landscape in the City. Zito is a recent master’s graduate from Michigan State University where he was a Graduate Teaching Assistant. Some of his achievements include First Place in the Wilson Center International Guitar Competition and Special Prize at the Jarek Smietana International Guitar Competition in Krakow, Poland.

He was awarded the guitar chair for the Dr. Phillips Jazz Orchestra directed by esteemed bassist and educator Rodney Whitaker. Other collaborations include performances with Wycliffe Gordon, Michael Dease, Joy Brown, Leon Anderson, Rodney Whitaker, Dick Oatts, Chad Lefkowitz Brown, Adam Nussbaum, Terell Stafford, Kenny Washington, among many others. In 2019 he was named a “Geri Allen Fellow” of the Gathering Orchestra, an All-Star ensemble with residency in Detroit. In 2020, Zito became an Endorsing Artist for Benedetto Guitars, a leading manufacturer of custom handmade guitars. Most recently, Zito was admitted into Juilliard's Artist Diploma Program for two years on a full scholarship, where he is a part of their most prestigious ensemble.

James Zito is a dedicated music educator and has taught jazz improvisation and Guitar at The Dr. Phillips Jazz Intensive, Washington Heights Expeditionary Learning School, The Orlando Jazz Workshop, South Hampton Summer Jazz camp, Michigan State University, and many more. He is currently working on his first project as a leader.