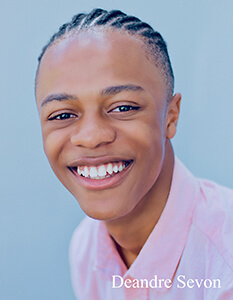 Deandre embraces individuality and self-expression. He has been working in the industry since 2012. He has studied Jazz, Tap, Ballet, and Hip-Hop, and has worked with Broadway Choreographers such as Susan Stroman, Jeff Whiting, and Denis Jones. He has also worked as a Choreographer at the French Woods Festival of the Performing Arts. TV credits include Law and Order: SVU (NBC), Person of Interest (CBS), and Saturday Night Live (NBC). Stage Credits include IBIS (off-Broadway), Runaways (Off-Broadway), Mother Courage and Her Children (Off-Broadway), The Scottsboro Boys (Center Theatre Group), and Thriller Live (Int'l Tour). Deandre is currently a rising senior at the University of North Carolina School of the Arts School of Drama seeking a BFA in Acting.