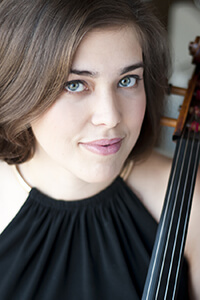 A passionate educator, Ms. Freivogel is an Artist-in-Residence at Temple University’s Center for Gifted Young Musicians and maintains an active private studio in Philadelphia. She is on the summer faculty at St. Paul Chamber Music Institute, Credo and Brevard Music Center. She also works with students at Swarthmore College and has taught chamber music at Oberlin Conservatory.

Ms. Freivogel began her cello studies with her mother in her hometown of Ann Arbor, Michigan at the age of four. She earned degrees in Cello, Viola da Gamba and Baroque Cello Performance from Oberlin Conservatory of Music working with Darrett Adkins and Catharina Meints, and degrees in String Quartet Performance from Rice University’s Shepherd School of Music and Yale School of Music, where she worked with Norman Fischer and Clive Greensmith.

Ms. Freivogel is married to violinist J Freivogel, also of the Jasper String Quartet, and they live in Philadelphia, PA with their two children.