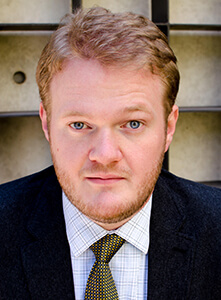 Tenor Zachary Averyt made his operatic debut in 2001 as Kaspar in Amahl and the Night Visitors, and has continued to delight audiences ever since. He appears frequently with some of Houston’s most notable ensembles, and was recently hailed by the Houston Chronicle as a “strong, clear and bright tenor,” praising him for the “warmth and ardor of his singing.”

Some recent engagements have included Benjamin Britten’s Serenades for Tenor and Horn and Les Illuminations, which garnered praise for “the warmth and power of his voice” and “a notable stage presence with solid bearing and intense focus” (BroadwayWorld.com). Such positive reception of his interpretations of Britten has put the composer’s solo and chamber works at the center of Averyt’s extensive repertoire. Solo recital ventures have explored a wide variety of English art song, folk song, and hymnody; the five Canticles of Benjamin Britten; and the intersection of art and poetry within song cycles by Ralph Vaughan Williams.