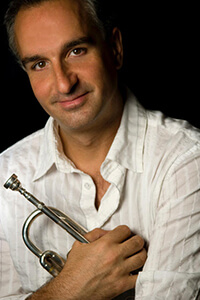 Balio has been a frequent soloist since his earliest days as a student, having made his debut at the age of 15 playing Haydn’s Concerto with the Milwaukee Symphony in his home state of Wisconsin. Over the years, he has appeared as soloist with various orchestras in Europe, the US, South America, and Asia under the batons of noted conductors Mehta, Venzago, Herbig, Temirkanov, Rozhdestvensky, Stenz, Lintu, and McGeegan. His Carnegie Hall solo debut, came in 2013 in the company of the Moscow Chamber Orchestra and Maestro Constantine Orbelian. Naxos has recently issued his first solo recording, the Weinberg Trumpet Concerto with the St. Petersburg Symphony. He also was soloist for the Oslo Philharmonic’s recent release of Scriabin’s Le Poéme de l’Extase.

The last and still emerging chapter in this biography is his founding of the Future Symphony Institute, a nonprofit think tank dedicated to bringing the best thinkers and experts from outside the arts together to confront the various challenges facing orchestras and classical music both in the US and worldwide. Please visit the Institute’s website at www.futuresymphony.org to learn more about the future of classical music. Andrew Balio is a Yamaha artist.