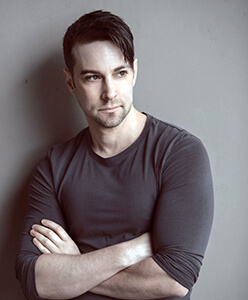 John de los Santos has been called a “brilliant combination of literary insight and choreographic creativity.” He has staged a range of productions that include opera, musicals, plays, concerts, and ballet. His productions include the world premiere of The Astronaut Love Show at the Kraine Theater (NYC), The Rose and the Knife, Otello, and Le Comte Ory (called “a perfect fusion” by The New York Times) for LoftOpera (NYC), La Cage Aux Folles for Skylight Music Theatre, La Fille du Regiment for Arizona Opera, South Pacific for Ashlawn Opera, María de Buenos Aires for San Diego and Fort Worth Opera, and Lexington Philharmonic, and Green Sneakers for Opera Birmingham and the Southside Theatre at San Francisco’s historic Fort Mason Center. He choreographed the world premiere of Jake Heggie and Terrence McNally’s Great Scott, directed by Jack O’Brien, for the Dallas Opera. His choreography has also been seen at the Washington National, Florida Grand, Philadelphia, Des Moines Metro, Utah Festival, and Austin Lyric Opera Companies.

John’s first libretto with composer Clint Borzoni, When Adonis Calls, was selected for inclusion in Fort Worth Opera’s 2015 Frontiers showcase and Opera America’s 2017 New Works Forum. It had its world premiere at Asheville Lyric Opera in 2018, directed and choreographed by the librettist. John’s second collaboration with Borzoni, The Copper Queen, won the top prize Arizona Opera’s commission program, Arizona SPARK. He was then commissioned by Washington National Opera’s American Opera Initiative to create an original work with composer Christopher Weiss. The resulting piece, Service Provider, premiered at The Kennedy Center in 2015, and has since been performed by Urban Arias, Opera Memphis, Hawaii Opera Theater, Virginia Opera, Westminster Opera Theatre, and was selected as the first opera performed by the Lake George Music Festival. In 2019, his one-act collaboration with Scott Bradley Joiner, The Shower, premiered at the Vienna Summer Music Festival.

From 2003 to 2010, he served as resident choreographer for the Fort Worth Opera, creating dances for Rigoletto, Salome, La Traviata, Amahl and the Night Visitors, and the world premieres of Frau Margot and Before Night Falls. John made his directing debut there with Carmen, followed by The Mikado and The Pearl Fishers. In 2010 he made his choreographic debut for the Dallas Opera with Don Giovanni. John has served on the directing faculty of the Seagle Music Colony in Schroon Lake, NY, where his productions have included Anything Goes, Crazy for You, The Medium, The Fantasticks, The Mikado, La Boheme, Guys & Dolls, Brigadoon and L’Italiana in Algeri. John has also coached young artists with the Washington National, Arizona, Fort Worth, and Des Moines Metro Opera Companies.

Other productions include Italienisches Liederbuch for Voces Intimae, The Golden Apple and the world premiere of Pure Country for Lyric Stage, Spring Awakening and Dogfight for WaterTower Theatre, and Carousel for Ashlawn Opera. For the Dallas-based theatre company Uptown Players, John choreographed the American premiere of the Pet Shop Boys musical Closer to Heaven, the regional premiere of Altar Boyz (for which John was awarded the DFW Critics Forum Award for Best Choreography), and directed and choreographed the regional premiere of Hello Again and the American premiere of Soho Cinders. John is originally from San Antonio, Texas, where he performed as a principal member of the Alamo City Dance Company. He received his BFA in Theatre/Film Performance & Direction from Texas Christian University.