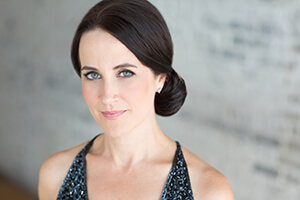 Mezzo-soprano Adriana Zabala has created roles in operatic world premieres including Sister Carrie, Doubt (recently broadcast on PBS' Great Performances), Dinner at Eight, The Manchurian Candidate, Volpone, and Steal a Pencil for Me. Recent credits include Florencia en el Amazonas with San Diego Opera (debut) and Madison Opera, the new opera Fellow Travelers, a reprisal of Cherubino, her signature role, and her debut with the Berkshire Opera Festival as Composer in Ariadne Auf Naxos. Ms. Zabala has been a soloist with the Minnesota Orchestra, the Orchestra of St. Luke's, the New Jersey, Jerusalem, Virginia, and Jacksonville Symphonies, The Saint Paul Chamber Orchestra, the Mormon Tabernacle Choir, and has appeared in recital at the Kennedy Center, Carnegie Hall, Wolf Trap, with the Source Song Festival, The New York Festival of Song, the Salzburg Chamber Music Series, and many others. She is an alumna of the University of Cincinnati College-Conservatory of Music and Louisiana State University, had apprenticeships at Santa Fe and Wolf Trap, and was a Fulbright Scholar at the Mozarteum in Salzburg. She is a proud member of the voice faculty at the University of Minnesota.