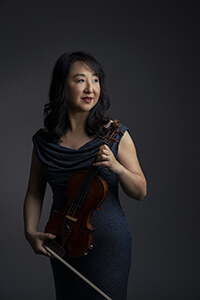 An international award-winning violinist, Yuan-Qing Yu leads an active life as a soloist, chamber musician, and educator. A native of Shanghai, China, she was appointed by Daniel Barenboim as the Assistant Concertmaster of the Chicago Symphony Orchestra in 1995.

She won the Chinese National Violin Competition at age 17. The following year, she captured second prize at the Menuhin International Violin Competition. She was awarded the grand prize in the Holland Music Sessions Competition two years later. Yu also took third grand prize in the Jacques Thibaud International Competition in Paris. She has given numerous critically acclaimed performances as featured soloist with the CSO, the Monte Carlo and Radio France philharmonics, and the London City Orchestra. She has performed under Christoph von Dohnányi, Harry Bicket, the late Sir Yehudi Menuhin, Marek Janowski, and James DePreist, among others. She regularly appears in recitals in the U.S., Asia, and Europe. An avid chamber musician, Yu has collaborated with Daniel Barenboim, Pinchas Zukerman, Menahem Pressler, Lang Lang, and Yo-Yo Ma.

A contemporary-music enthusiast, Yu gave the Chicago premiere of Pierre Boulez’s Anthèmes 2 for solo violin and was invited by Boulez and Barenboim to perform the work in Berlin for Boulez’s 80th Birthday celebration concert.

In 2011, Yu founded Civitas Ensemble (a 501c3 organization) with her colleagues, to curate collaborative projects with local and international artists, and to bring music to the communities with limited resources. The Ensemble released its first album Alla Zingarese on Cedille Records label on August 17, 2018 (http://www.cedillerecords.org/albums/alla-zingarese), and its second CD featuring commissioned works by Chinese composers will be released in January 2020.

Locally, she can be seen and heard on WFMT’s Live programs, in concerts with Civitas Ensemble, on the Norton Building Concert Series, and the MusicNow series at the Harris Theater. Her performance of Vivaldi’s Four Seasons is available for download at http:// csosoundsandstories.org/video/vivaldi-four-seasons-natural-beauties/.

Yu also serves on the violin faculty at Northwestern University and Roosevelt University. Yuan-Qing Yu earned an Artist’s Certificate in violin and a Master’s Degree in music from Southern Methodist University.